When you have a brewery, it doesn´t take long before you wish for a distillery as well. In 2011 - as the first craft beer brewery in Norway - we opened our own little distillery with shiny copper boilers and everything you need to make quality spirits. 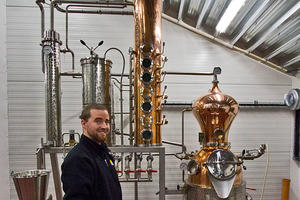 Yggdrasil Akevitt is aged in oak barrels between six months and one year, and has the flavors of a variety of traditional spices. The aquavit has a rich aroma of anise, caraway, oak and citrus and is named after the "tree of life" in Norse Mythology. While many aquavits are made entirely from potatoes, we use the same base ingredient as our beers - barley malt - to make Yggdrasil, in addition to the more traditional spirit from Norwegian potatoes. This combination gives the spirit a round mouthfeel and aromatic character with no sugars added. Aquavit can be enjoyed by itself, but works well with robust food in all seasons. 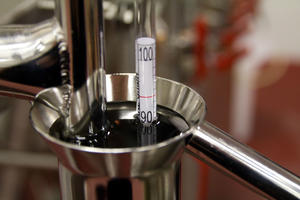 Heimdall Gin is made by slowly distilling pure norwegian potato spirit through a collection of carefully selected botanicals. The result is an aromatic and elegant gin with flavors of juniper, coriander and citrus that is equally enjoyable neat as it is in a distinctive gin and tonic. Heimdall Gin is named after the god Heimdall, who guarded the rainbow bridge between the human world, Midgard, and the home of the gods, Åsgard.

Follow us
Design: CoreTrek AS - Utvikling: Fox Data AS